Get ready to be an ice hockey fan – all you need to know about the ice hockey game! 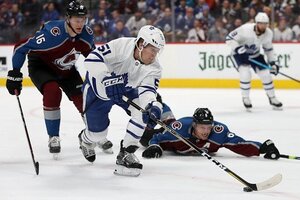 There are many types of hockey and one of the most exciting is, no doubt, the game of ice hockey. It has a long history, with many debates on how the game was first started. The first organized indoor hockey game was played March 3, 1875 at Montreal’s Victoria Skating Rink, and the National Hockey League (NHL), the best known professional ice hockey league in North America, was founded on November 22, 1917.

The game is easy to follow once you know a few basic rules, terms, equipment, and practices, and of course, understanding what all the fouls are about!  During this workshop, our speaker will guide us on all the key aspects of the game – helping us know our way around the rink, how the players shoot and pass the puck, what makes up a hockey penalty, the positions on a hockey team and even about the unwritten hockey rules that a player must never break.

If you live in Seattle, did you know that on December 4, 2018, the NHL approved a proposal by Seattle Hockey Partners to grant an expansion franchise to Seattle. It will be the first professional hockey team to play in Seattle since the Seattle Totems of the Western Hockey League played their last game in 1975. The new Seattle NHL team, Seattle Kraken, will begin play in the 2021–22 National Hockey League (NHL) season. The team will compete in the NHL as a member club of the league’s Western Conference Pacific Division.

Understanding these ice hockey rules could help you be a super fan of your own home team, wherever you may be located!

Gilbert Villalpando, Interim VP of Equity, Diversity and Inclusion at Bellevue College, serves as a senior member of the President’s Cabinet and is the senior official responsible for the College’s strategic planning related to diversity, equity, and inclusion. Gilbert is also a player for the Icemen team in the Greater Seattle Hockey League (GSHL) and is truly passionate about the sport. Since 2001, the GSHL has grown into the largest adult recreational ice hockey league in the Pacific Northwest. With nearly 3,000 registered players and 100+ teams across 16 divisions & subdivisions, the GSHL is also one of the largest adult recreational hockey leagues in the country.